This year’s review features books I didn’t choose but read anyway, procrastination, and, as always, the new year’s reading list. 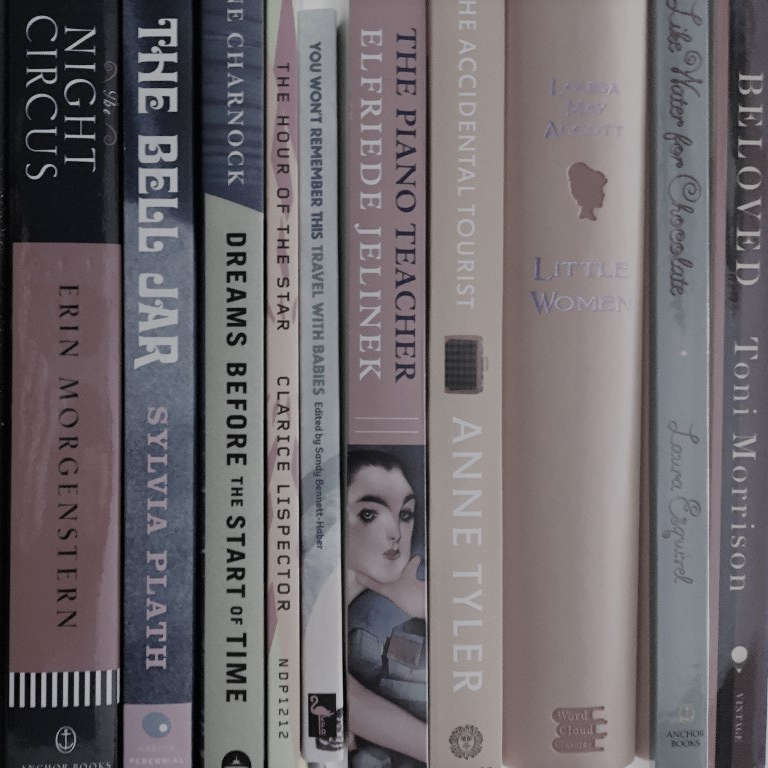 At this time of year, I normally like to compile a list of notable books that I’ve read over the past year as well as create a reading list for the year ahead. However, there’s been a change in plans this year, because I have already shared my shortlist of notable books from 2018 elsewhere. As you may know, I belong to the Women Writers Network, which is a volunteer group running a Twitter account that focuses on supporting and promoting women writers. Helen Taylor (one of the founder members and author of The Backstreets of Purgatory[1]) compiled our favorite reads of 2018. Since my top six books of 2018 appear on this list (you can find the list at Helen’s web site), I thought I’d focus on some very different reading highlights from the past year before presenting my to-be-read list, which I eternally hope to complete by the year’s end regardless of how faithless I was to the previous year’s list.[2] But I digress. Let’s get back to last year’s reading adventures.

The Alternative Reading Highlights of 2018

Over the past few years, I’ve participated in both reading and book photo challenges (you can view my entries to the Reading Women Month book photo challenge and Bookriot’s #Riotgrams here). Although I’ve never per se “won” a challenge by completing all the categories, it’s fun to see what fellow book lovers share.[3] Generally, the highlight of my reading challenges is that they inspire me to stretch outside my reading comfort zone or discover more diverse perspectives.[4] However, this year’s Reading Women Challenge inspired me to stop procrastinating and finish the book that’s lingered the longest on my reading list. I’m pleased to announce I finally read Woman in the Nineteenth Century by Margaret Fuller. Despite it being a more challenging read, this fascinating early feminist tract makes a strong religious argument for woman’s self-sufficiency and expanded rights. Partly inspired by Mary Wollstonecraft’s A Vindication of the Rights of Women, Fuller’s work in turn spurred suffragists in the United States to demand the vote.

Most Unlikely to Be Read

Book challenges influence my reading greatly, as do Twitter chat suggestions and personal recommendation. One of the more whimsical books I read this year is one I wouldn’t have chosen for myself, even had any of these sources suggested it.[5] Though a difficult to categorize book, Hannah Hart’s My Drunk Kitchen: a Guide to Eating, Drinking and Going with Your Gut proved to an enjoyable read. Part sentimental, part hilarious, part memoir, and part cookbook, it left me bemused but feeling upbeat. While I’m not sure I’d attempt some of the recipes, I’d definitely read it again.

Most Unexpected Source of Reading Recommendations

Speaking of books I wouldn’t have selected without an outside influence, I curiously have Netflix to thank for my discovering the Phryne Fisher mystery novels by Kerry Greenwood. Halfway through the first episode, I already suspected it was based on a book (Cocaine Blues), and the credits proved me right. My thoughtful spouse picked up the first three books for me, which I then read in short order. Reminiscent of Agatha Christie’s work (roughly the same period, different country, very different detective), these flapper detective novels were a great change from stuffy male detectives. Since the television series diverged a fair bit in places from their source material, I’m glad I saw it before I read it—I happen to be one of those people who usually takes a strong dislike to films/television shows when I read the book first. Either way, I intend to check out the credits in the future, in case they point me to a good book or two.

Hopefully, you’ve found some reading inspiration here, regardless of the source. Here’s to the new year and happy reading!

“But Macabéa in general didn’t worry about her own future: having a future was a luxury.”

Although Clarice Lispector’s final novel, The Hour of the Star (translated by Benjamin Moser), is a slim volume, no less than the creation of the cosmos serves as its opening. Author Rodrigo S. M. (the book’s narrator), unable to decide where he should begin recounting the tragic tale of his young character, Macabéa, chooses prehistory. It’s all the more a remarkable place to start, given that the narrator emphasizes how insignifcant Macabéa is: she could be readily replaced by any other girl like her. But in Lispector’s contemplative work, this signals the novel’s philosophical concerns with poverty, identity, and existence itself. Because if Macabéa is practically interchangeable with countless other poor, northeastern girls of Brazil, she also symbolizes them and becomes something akin to an archetype whose ancient roots are difficult to pinpoint. Rodrigo seems to ask: Have girls like her existed since life has?

“Make no mistake, I only achieve simplicity with enormous effort.”

From this perspective, it’s little wonder that Rodrigo suffers as he writes about Macabéa’s humble life. Lispector’s dichotomous characters illustrate both the difficulty in truly understanding another’s existence and with communication.1 In many ways her opposite (well-educated, clearly older, and affluent), the narrator anxiously strives to pare down his linguistic excesses, because they don’t suit Macabéa’s circumstances. Yet, Rodrigo often fails to retain this simplicity as he expounds on his writing process or as he struggles to explain Macabéa’s “delicate and vague existence”. His attempt to bring himself closer to the virginal Macabéa’s level—by swearing off sex and sports—is undermined as he dines on fruit and sips on chilled wine, luxuries unavailable to her. Here, Lispector entertains the possibilities of empathy while delineating its boundaries. Though pained by his efforts to relate Macabéa’s tale, Rodrigo acknowledges that he writes because he “has questions and no answers”. Macabéa, in contrast, questions nothing and is happy simply because she believes, though not in any specific deity, person, or thing. Rodgrigo’s attempts to define this young woman and her elusive grace seems only to cause him to question himself instead (“Am I a monster?”).2

“But Macabéa in general didn’t worry about her own future: having a future was a luxury.”

As the unlovely Macabéa’s tale finally takes shape, her existence proves to be as undernourished as her body is: orphaned as a child and suffering from rickets, raised by an indifferent aunt, and transplanted from her rural town to Rio de Janeiro, where her life (once her aunt dies) is a lonely one. This young lady’s life is also circumscribed by its material lack. Possessing only three years of education, listening to the radio is a source of unexpected beauty (when she first hears opera) and confusion (when radio hosts discuss unfamilar words/concepts such as “culture”). Lispector’s point that she resembles thousands of girls like her, underscored by Rodrigo’s ineffective guilt that he should do something for this fictional girl, makes a grim point about the haves and have nots.3 Unfortunately for Macabéa, no forthcoming rescue or deeper connection forged with another occurs. Although she briefly attracts the attentions of Olímpico (another northeasterner), he leaves her for her more attractive coworker, Glória. Glória’s guilt prompts her to help Macabéa in some way, but this assistance unintentionally imperils Macabéa. Without revealing too many details, Macabea’s life explodes into that of a “thousand-pointed star” as she departs it, leaving behind Rodrigo—an author powerless to save her—attempting to divert himself from thinking about his own eventual demise.

The Hour of the Star recalls a certain adage about judging books by their appearance. As someone new to Lispector’s work,4 I wasn’t sure what to expect from such a slim book (under 80 pages), but I was pleasantly surprised to discover this serious meditation on life, death, poverty, writing, etc., complicating a seemingly simple story. The Hour of the Star is a must for a thinking readers, as it gives its audience much to mull over long after its cover is closed.

The Chicken Soup Murder, Maria Donovan’s debut novel, is a moving story about loss and justice. It focuses on a close-knit band of neighbors whose lives are upended by the young deaths of two of their own: first, Janey’s father to cancer and then Irma to “natural causes”. But was Irma’s unexpected death a murder? Michael, her 11-year-old neighbor and the story’s narrator, is stubbornly convinced that Irma’s boyfriend—a police constable, no less—murdered her. No one else, even his Nan, Zene—who worried about Irma after previous electrical mishap occurred following her boyfriend’s DIY project—shares Michael’s suspicions. Although Michael argues she “can’t just have died”, it can happen as his Nan and others point out. Donovan neatly balances Michael’s certainty with adult doubts about his reliability in a manner that leaves readers nonetheless sympathetic to Michael.1

But the heart of Donovan’s novel isn’t its mysteries, but in how it truly inhabits the world of the grieving and how it traces the aftermath of these deaths. Irma and Zene’s decision to live life more fully2 following the loss of Janey’s dad leads Irma to Shawn Bull and his son, George. The perhaps too-aptly-named Bulls become entrenched in Irma’s life, damaging her friendships with her neighbors as she adopts Shawn’s rather less empathetic views.  Michael and Janey are instantly recognizable as youths on the cusp of maturity, a triumph on Donovan’s part (her careful characterization even shows how Janey’s year ahead in school makes her less naïve than Michael). Both are caught in this tide of grief even as their lives go ever onward, the seasons marked by sports and school. Michael is perhaps literally haunted by Irma’s loss and is pained that his grief is unacknowledged by the greater community that doesn’t understand he had a closer relationship with Irma than George did. Janey struggles to cope with her dad’s loss and her mother’s resulting deep depression, alternates between parenting her mother and being infuriated with her—and occasionally, Michael as she worries that he’s forgotten her father (he hasn’t). Among the more poignant moments stem from Zene’s counsel to Janey “The league tables of grief. But it’s not a competition, Janey. Nobody wins.”3 Indeed.

Michael is a remarkable character, a generally sensitive boy whose love for Irma propels him into the awkward role of avenger. But it’s his determination to do right by Irma that raises questions about the lengths to which it’s appropriate to pursue truth or protect loved ones. The degrees in which the novel explores right and wrong here, range from childhood misdemeanors to adults behaving badly, with shades of grey in between. Michael, once bullied by George, in turns is accused of (and occasionally does) torment George. Shawn isn’t above threatening Michael or Zene to protect his son, even after Michael rescues George from certain death. Zene’s decision to keep mum about Michael’s parents and their incarceration (“Best left alone”4) proves to be problematic in several ways. Without giving too much away, her decision to do what she “thought was best” leaves her in a vulnerable position because she has kept secrets from her grandson.

The Chicken Soup Murder lets us coexist in the sometimes messy lives of the bereaved and wronged. Satisfyingly, it doesn’t have easy resolutions or simple fixes for strained relations. Nonetheless, the novel ends on a hopeful note that things will at least be addressed and may change for the better.

Summary: The Chicken Soup Murder is an engrossing, well-paced novel. An unconventional mystery, it features believable characters whose heartbreak is palpable and who occasionally infuriate us with their choices. Narrator Michael is an engaging and often funny, particularly when he doesn’t get adult references. Much like life, there are no easy fixes but hope persists.