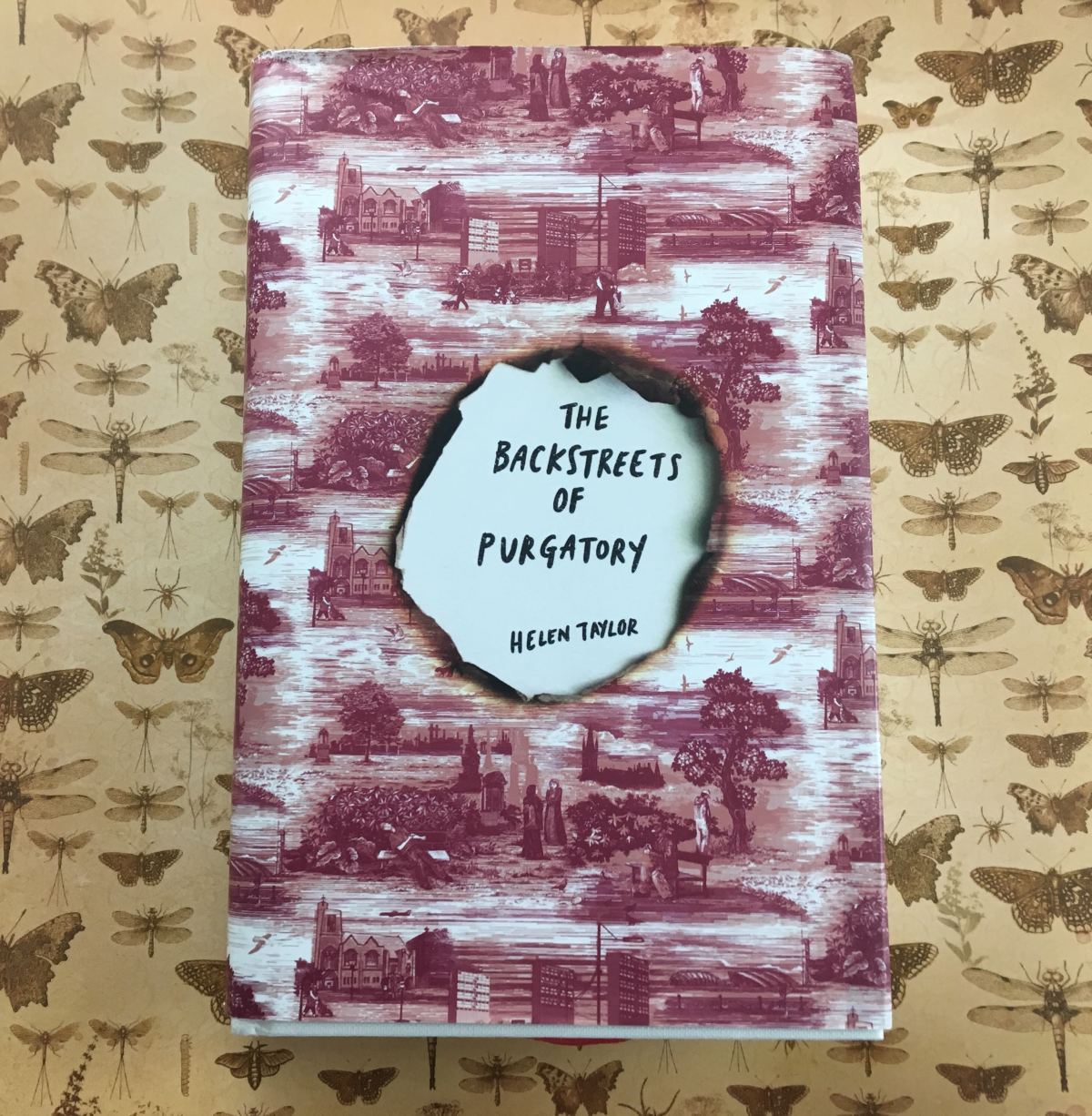 …the only way to honour her [Finn’s Italian paternal grandmother] as she deserved to be honoured, was to completely piss off his social-climbing mother, subvert his turgid middle-class upbringing — and commit entirely to the role of misunderstood artist. Which he’d done with fervor until the pretence and reality had become inseparable.

The fact was his tutor didn’t know one end of the paintbrush from another. He didn’t need permission from an uptight spinster to paint what he wanted to paint….The picture was clear….He should be out there with the people…not hanging around here, being misunderstood and dragged down by these pretentious losers.

from The Backstreets of Purgatory by Helen Taylor

From the outset, The Backstreets of Purgatory promises its readers “art, insanity, and Irn-Bru”. The Glasgow-based novel, which follows the tribulations of its protagonist (Finn Garvie) and those of his overlapping social circles, initially might come across as the latest entry in the familiar tale of the tortured artist. However, it’s soon apparent that author Helen Taylor intends to take this story in a rather (darkly humorous) different direction. Early on, Taylor presents the ironic situation in which Finn, having devoted a considerable portion of his life to playing the “misunderstood artist”, decides to decamp from his art school before earning his coveted Master’s degree on grounds that he was “being misunderstood”.* And given that Finn is funded (perhaps reluctantly) by his middle-class parents, he isn’t exactly the sort one pictures when imagining an impoverished but gifted artist descending into madness. But that’s rather the point here. The relationship between suffering and great art is at best a murky one, and it’s clear that The Backstreets of Purgatory intends to challenge what readers “know” about art and mental health.

As a character-driven novel, The Backstreets of Purgtory delivers with its lovingly drawn if all-too human ensemble. Taylor’s empathetic narration (split among four narrators) provides a multifaceted portraiture of the core characters that is nonetheless a very much warts-and-all approach (not unlike Carvaggio’s style of realistic painting†). As a result, we might see a character valorized in one chapter (eg, Finn rescues an inebriated Maurice from sleeping rough) but later witness their more ignominious side (in Lizzi’s case, when she forgets her professional ethics in a misguided effort to protect Finn). The three other narrators (intriguingly, all female) also provide alternative (and arguably, corrective) perspectives to Finn’s narrative—and sometimes, to each other’s viewpoints. Since their relationships with Finn range from intimate to indirect connection, we get a sense of how Finn affects not only him, but people close to him but also their larger community,‡ a refreshing change from the tendency to observe mental illness as though it occurs within a vacuum.

For Finn, the appearance of Purgatory parolee, Carvaggio (his artistic hero and alleged ancestor) seems to be an answer to his artistic conundrum. Coupled with the inspiration provided by Kassia (an au pair from Poland), Finn is hopeful that he’ll finally paint something meaningful. However, Carvaggio’s arrival instead marks a period of crisis for Finn and company, attributable to misleading appearances, hasty assumptions, miscommunication, and, often, Finn himself. As Finn and his friendships deteriorate, Finn also finds that both muse and mentor are less helpful than hoped, with Carvaggio living up to his hellraiser reputation. Nonetheless, the shocking conclusion, complete with its untidy (though very realistic) resolution, will leave readers unsettled as they ponder the underlying issues that contribute to troubled persons’ faltering sanity or sobriety long after they finish reading this novel.

Summary (TL;DR): The Backstreets of Purgatory is both a profane and darkly humorous novel that examines several weighty issues, ranging from mental illness, substance abuse, and gender inequality.§ An immersive read with well-drawn characters that builds to a devastating finale, the reader will feel this book’s impact long after they finish it.

*Arguably, Finn hasn’t been misunderstood but understood all too well. Finn’s reaction—one of outright rejection of criticism from a more learned woman coupled with expecting to be top of his class—is a neat mixture of fragile ego, entitlement, and underlying misogyny suggestive of toxic masculinity.

†While this novel includes discussion of a famous artist and his body of work, it’s not necessary to be well versed in Carvaggio’s oeuvre, as the novel provides sufficient background information. For those interested in his biography or the artworks whose names are used as chapter titles in The Backstreets of Purgatory, I recommended checking here.

‡Described in visceral detail that brings the city to life, Glasgow (particularly its West End) seems to function much like a village in that everyone either knows each other or knows a friend of a friend, giving it an atmosphere that ranges from close-knit to claustrophobic. It’s partly due to this cozy sense of community that Taylor succeeds in making it plausible that many of the major characters, regardless of their divergent backgrounds, meet and interact.

§Throughout the novel, several incidents demonstrate how women (regardless of class, race, or finances) receive unequal treatment ranging catcalling (street harassment) to increased domestic workload. For example, Dr. Esme Blythe’s relative security (in terms of finance and family) does not prevent her from being among the many working women who complete the majority of household and child-rearing tasks while her spouse idles on his phone (a fact made more heinous since he’s content to let her do the washing up despite her severe eczema).

4 thoughts on “﻿Review of The Backstreets of Purgatory: Delusion and Dark Humor in Glasgow”